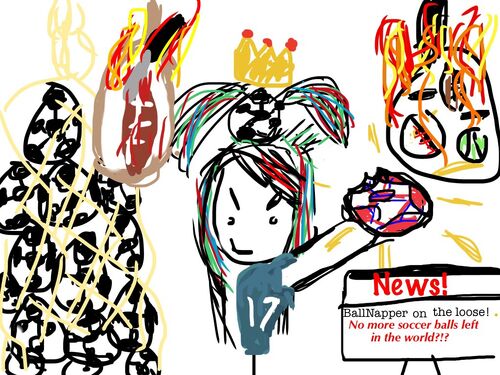 Going to make this more clear xD : There's a girl named G3, who stole all the soccer balls in the world and a lot of other sports balls because she felt they took the soccer balls's spotlight. So she burns up the other balls but ties the soccer balls up for herself. She has so many she stuffed her hair in one and ever since her hair grows out of it. So yeah, basically, THE END. (P.S. - Murderer Rapunza stabbed the football for BallNapper G3 c;) Fun fact: She always wears her Jersey (Designed by Designer TayTay) when she steals balls. [; (I'm not actually #17 though xD)