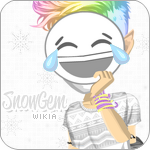 Snows Logic - If it loads fast, it's not good enough.